How to be a Mythbuster

On Friday the 25th of November, at the University of Twente’s 50th anniversary Dies Natalis celebrations, the Mythbusters will receive an honorary doctorate for their role in popularising science and technology.

Earlier today Adam Savage gave a lecture at the University of Twente. As an avid fan of the Mythbusters programme I was hoping to attend the lecture, but unfortunately the event was fully booked. There was a livestream available however, which was a decent alternative. It was interesting to watch his lecture: he had no reference material at hand but his sheer enthusiasm easily carried the entire presentation.

Adam Savage was clearly surprised by the effect their programme has had, how many people it has inspired. He said originally they had not set out to inspire others (“We just wanted to follow our curiosity and have some fun”). By showing how easily accessible and fun science can be, they may just have inspired the great minds of the future.

The spirit of Halloween

Although Halloween isn’t that popular in The Netherlands (yet), it still gives you a nice excuse to create weird things. This year I decided to create a scarecrow/wraith-ish figure: I made a wooden frame, covered it with polyurethane foam, shaped it with a knife, finished it with a layer of paper mache, and finally placed some LEDs in its ‘head’. It didn’t take long to create and it was fun to use old school materials again.

To be honest I’m very tempted to uproot it and give it a new home in a nice forest close by. I think you’re allowed to be a tiny bit evil on Halloween. 😛

One of the benefits of living on the countryside is that there is barely any light pollution, which is ideal for stargazing. It is in fact one of the darkest areas of the Netherlands, which is why there is an observatory not too far from here.

Tonight around 22:00 marked the predicted spike in meteor debris from comet 21P/Giacobini – Zinner entering our atmosphere, better known as the Draconids meteor shower (named after the constellation from which the meteors appear to fall). It was supposed to be quite a unique event with a high rate of meteors per minute. Every year I drive to the middle of nowhere to watch the annual peak of the Perseids shower, which is a great sight to watch, so I figured I’d pop out and watch the Draconids for a change.

Unfortunately due to a full moon and a very cloudy evening (including rain) it was slightly disappointing. There was a brief break in the clouds around the estimated peak luckily enough, so I did get to see a handful of meteors, but sadly it was a bit disappointing. I hope others have been more fortunate tonight.

The London Design Festival is an annual design event, first staged in 2003. The nine day festival programme runs from the 17th till the 25th of September and is made up of over 280 events and exhibitions staged by 200 partner organisations across the design spectrum.

Last Saturday we visited a product design exhibition at the V&A, today we’re visiting Design Junction followed by Tent London in the Old Truman Brewery, and on Sunday it’ll be the Design Museum and 100% Design. Perhaps we’ll manage to squeeze in Park Plaza Westminster Bridge’s “Travel Through Design” in there as well, showcasing the work of many of Italy’s top design companies. To sum up: design overload. :O

The V&A had an impressive collection of products, of both British and international design. To me, when viewing the collection it was like the “Past Futures” lectures by J.W. Drukker had come to life; his lectures were truly captivating. One thing the collection made apparent was how the appearance of products reflected a generation’s confidence in technology as a symbol for a hopeful future.

To be honest I’m particularly interested in the Design Museum‘s exhibition about Kenneth Grange (think Kenwood mini mixer, Kodak camera, Parker Pens, etcetera). Kenneth Grange is Britain’s leading product designer and this exhibition is his first UK retrospective celebrating his work, design journey and the role he has played in making Britain modern. It feels like my initiation in becoming part of the UK’s design community.

By the way, click on the image at the top of this entry if you want to see some pictures taken at the different events and exhibitions.

I have been following the recent patent battle between Samsung and Apple, which to me has just confirmed how outdated and perverted the patent system is in this day and age.

The validity of patents has remained relatively unchanged since the Industrial Revolution; in fact it has gone from 14 to 20 years validity over that time frame. Technological progress however moves at an exponential rate, mainly because we leverage our knowledge standing on the foundations of knowledge uncovered by the generations before us. It doesn’t take a brilliant mind to realise that the term of validity is no longer congruent with the rate at which technology progresses nowadays. In fact, it is so incongruent that patents actually hamper the rate of technological progress.

This issue is compounded by the reality that companies can trade in patents, which has resulted in the existence of companies whose sole purpose is to acquire lone patents and create a big package which they then sell off to the large corporations. Those large corporations will then utilise those sets of patents to try and block off the competition, which brings us back to the first paragraph.

An additional issue with patents is that it is absolutely pointless for an individual to protect their invention with a patent if they will not be able to afford the costs of defending their rights in court. A battle that cannot possibly be won if one has to defend it from the large corporations, as they have a lot of patience and capital and will simply outlast you – it is not about who is right at all.

As long as patents can be traded (note: I’m not talking about licensing), the period of validity remains unchanged, and the individual isn’t protected from the might of the large corporations, patents are a farce that achieve the exact opposite of why they were created in the first place.

Considering how often I dabble with electronics, I figured it would be a good idea to buy an Arduino. For those unfamiliar with the Arduino: it is an open-source electronics prototyping platform based on flexible, easy-to-use hardware and software. I’m hoping that it will expedite any future initial prototyping and (user) testing I do. Worst case scenario: I found a new hobby. 😛 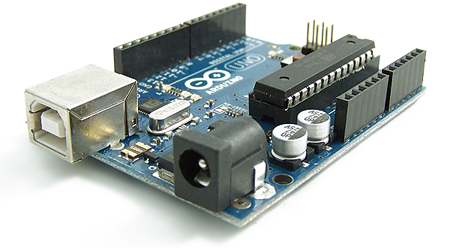 On a related more rambling note: considering the trend to move from through-hole components to surface mounted devices (SMD), I wonder what effect that will have on the hobby and prototyping market. I have come across a few components that were only available in SMD form, which makes testing a bit trickier; after all you cannot use a simple breadboard and are forced to resort to etching techniques.

Youth interested in electronics may encounter a higher entry level to start experimenting with electronics and considering the general aversion towards beta courses, that is something you’d want to avoid no?

As promised, here are a few concrete results of the assignment. The banner design featuring elements of the new corporate identity has been photoshopped into the actual surrounding, to give the client a better impression of the final result.

Benchmark Electronics‘ lead designer contacted me today with an interesting job offer for this summer. The job consists of graphic design based consultancy regarding the corporate identity and marketing strategies of Benchmark Electronics. Graphic design is an integral part of the multidiscipline that is industrial design engineering, so this job offers a nice playground for my skills.

New graphic elements will be introduced, which will be tested by creating creating several large banners sized 2.5x4m, to be positioned at various places in the company building. It will be the first time for me to create visualisations on such a large scale, which is pretty awesome. I hope to be able to update you on the results soon.

Looking for an internship in the UK

At the moment I’m just finishing up the last subjects, and I’m actively looking for a postgraduate internship in the UK to finish my Master’s degree. I noticed that for some odd reason a lot of sites offering internships in the UK do not have a section for engineering. O_o

In a country with a long list of big design firms such as IDEO, Dyson, Seymourpowell, Tangerine, Native, PDD Group, Arup, Creactive, JKR, Babcock International, Designit, Curventa, ?What If!, etcetera, one does hope for amazing (internship) opportunities and experiences.

Today I had my final bachelor presentation including exam and defence, to evaluate the result of my assignment as well as my general performance at Benchmark Electronics. It was about time I finished my bachelor to be honest: I had nearly completed all of my master subjects already. >_>

The presentation went very well; both the university and the company awarded me a 9 out of 10. As a present, the lead designer gave me his copy of “The Art of Innovation” by Tom Kelley – lessons in creativity from IDEO, America’s leading design firm. It’s a book I was planning to buy, and I really appreciated the gesture. If you are not familiar with IDEO or their approach to product development, here is a link to ABC’s Nightline “The Deep Dive” from 1999 documenting an example of IDEO’s creative process.

Working at Benchmark Electronics was a great experience: the people were very nice and helpful, and I am really thankful for the experience I gained there and all the opportunities they offered me. 🙂