Finally my new portfolio site is up and running. There are still some gaps that need to be filled in and info that needs to be added, especially on the Dutch version, but I’m well chuffed with the result so far.

It is quite nice the info can now be indexed by search engines and that I can directly link to specific content. Even at this early stage the site already seems easier to maintain and expand.

My old portfolio site (see above) was horribly outdated and it did not live up to my requirements anymore, so.. here’s to starting work on a new portfolio site. This time made in HTML rather than flash in order to be able to better present my work.

Aw I was really looking forward to participate in the BraunPrize competition this year. The kickoff was supposed to be in March/April of this year, but after contacting them it seems that the BraunPrize is undergoing some changes. It says “the competition will move from its two year rotation to the former three year rhythm” and thus won’t return until 2012. Still looks well worth the wait though, so I’ll definitely aim to participate.

At the moment I’m working on a redesign of Philips’ evaporative humidifier at Philips Design in Drachten. The task is to target the segmented and individualised market, using current emotion economy. By exploring the relation between the appearance of products and its interpretation by different consumers regarding expectation, emotion and product form, one can accurately target their needs and wishes.

The single restriction imposed on the redesign is to use the current components, or a volumetric equivalent. In case of Philips’ evaporative humidifier, this means the product will be rather large: an undesired characteristic amongst the chosen target group of women in the age category of 20-40. So I have decided to take the TRIZ approach in order to exploit this apparent contradiction, supported by target group research with an emphasis on brand qualities.

This afternoon I will present my findings to the team, as the assignment is almost coming to an end. It has been a very valuable experience to work alongside professional product designers and I am grateful for the opportunity.

Tom Hilgerink and I have just finished processing the data from the tests with our prototype. It has been quite fun to test the functionality, to actually see the product in action and to be able to test (and subsequently confirm) our calculations and predictions. Of course there are some recommendations for changes as well, but they are not groundbreaking. Click on the image in this entry to flick through some of our tests/results.

The ‘illuminating gloves’ power LED concept that Tom Hilgerink and I developed during the master course Sources of Innovation was chosen to be prototyped for the course Functional Prototyping; we received the invite today. Pretty awesome to finally have the opportunity to turn a concept into a fully functional prototype and test the design aspects we envisioned when we developed the concept.

We will have to keep track of our budget, design the electronics, program the ICs using C++, assemble the product, set up functionality tests, and finally evaluate the results. It is not often we get to prototype our products, so this will be a great learning experience.

The lectures will start next Monday, we will then begin preparing detailed workshop and realisation plans.

As promised, here is a temporary render of the 3D model of the Wii controller, made in SolidWorks and rendered in Photoview. It is not just a shell, what you see is the sum of all the components that make up the Wii controller. This has been done in order to be able to create an exploded view.

It is quite interesting to really scrutinise the components of the Wii controller. For example: you can see how much thought the developers have put into facilitating assembly, by giving each button a unique shape and by using colours where possible. I can admire the injection moulding architecture of the casing as well, to improve both its appearance and its functionality/rigidity. Not having to wire the speaker to the circuit board is quite brilliant too. Clearly it is a very well designed product. 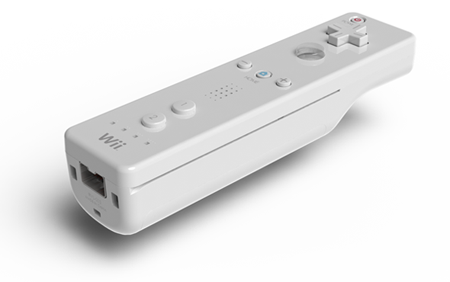 I’m currently working on recreating the Wii controller in 3D CAD, as part of my research for the course Evolutionary Product Development. The level of detail is intended to be high: an exploded view of all the components will be produced, stripping down the entire product to its basic elements. It is turning out to be quite a bit of work, but at the same time it is quite rewarding. I hope to be able to put up renders of it soon.

Here you can see the progress of my drawing skills so far, using the same basic sketching techniques you would use for hardcopy drawings. Click through for another sketch made around the same time as the one featured in this blog entry.

Uni offers an optional five day sketch tablet drawing course, spread over a period of two months, for students who wish to hone their digital drawing skills. It never hurts to gain additional knowledge and to try and achieve the industrial standard of seven high quality drawings a day, so I’ve decided to partake in the course. The first part of the course is about to start, so I better get moving..